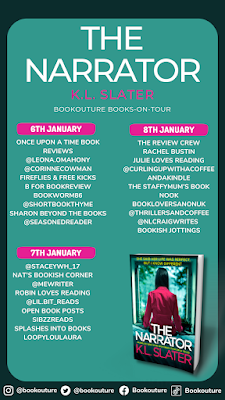 DESCRIPTION:
What if the chance of a perfect life… put your daughter in grave danger?Being a single mother is tough, but I’d do anything for my little girl Scarlet. I’d given up on my career as a voice actor when the call came, but suddenly I was the new narrator for a secret book from bestselling author Philippa Roberts, who has been missing for eight months. It was a lifeline for me and my daughter.I hated that it meant leaving Scarlet with my ex in his perfect new home with his perfect new girlfriend. But I knew it was the right thing to do.But as I start reading Philippa’s new novel, I start to wonder if it’s no coincidence that I’ve been chosen to narrate it. There’s something hidden in the pages of this book, I’m sure of it. Some clue to Philippa’s disappearance. And I don’t feel safe. I think I’m being watched. My room has been searched.And then my ex’s girlfriend calls in tears and everything starts to click together. If I don’t find answers fast, I’ll lose more than my second chance. I’ll lose my daughter.A completely gripping thriller that will hook you in from the first page and leave you gasping out loud. Fans of Our House, The Woman in the Window and The Wife Between Us won’t be able to put The Narrator down!
BUY LINK:
Amazon:   https://geni.us/B0BLCN1CF4social
You can sign up for all the best Bookouture deals you'll love at: http://ow.ly/Fkiz30lnzdo
MY THOUGHTS: 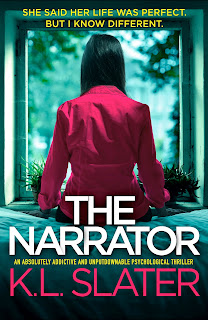 Title:   The Narrator
Author:  K. L. Slater
Publisher:  Bookouture
Genre:   Psychological Thriller
Format:  Kindle ARC
No. of Pages:  363
Date of Publication:   January 6, 2023
My Rating:   5 Stars
Eve had always enjoyed her job as an audiobook narrator, and she excelled as a voice actor while narrating a long-running series. After experiencing some serious personal problems, Eve has decided to focus her time and attention on her young daughter Scarlett. This break is also because the primary author Eve had been narrating for, Phillipa Roberts, has completely disappeared, having never been seen again. Therefore, the best-selling series, and Eve’s work, had come to a halt. However, a missing manuscript for the next book in the series has mysteriously surfaced. The publishers want Eve to narrate this very much anticipated book.
For Eve to take the job, she must leave her daughter for several months, but she’s not worried because she feels that leaving her in the care of her mother will work. However, her ex Hugo has other plans for their daughter, and this proves to be a distraction for Eve. Furthermore, Eve struggles with the context of the manuscript, and this is another source of her problems.
There are other stories being told in this thrilling book by K. L. Slater. We find that someone is being kept captive for a very specific reason, with cruel treatment being carried out. There is also a Phillipa Roberts super-fan, Chad, and the interesting role he plays in the story.
In this multi-layered story, answers begin to be told about the disappearance of the author, the trials that Eve experiences, and some surprising twists along the way. These twists play into Eve searching for answers, and this increases the tension in this exciting read. One thing that made this book such a fabulous read was getting an inside look at what goes on behind audiobook narrating, as well as the ins and outs of a book as it is being published and produced all while an intriguing mystery is being explored. Thank you to K. L. Slater for yet another wonderful read.
Many thanks to Bookouture and to NetGalley for this ARC for review. This is my honest opinion.
Please enjoy my YouTube video review -
ABOUT THE AUTHOR: 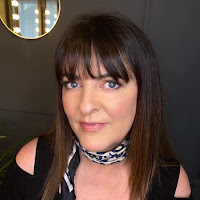 For many years, Kim sent her work out to literary agents but never made it off the slush pile. At the age of 40 she went back to Nottingham Trent University and now has an MA in Creative Writing.
Before graduating, she received five offers of representation from London literary agents which was, as Kim says, ‘a fairytale … at the end of a very long road!’
Kim is a full-time writer and lives in Nottingham with her husband, Mac.
https://klslaterauthor.com/
https://www.facebook.com/KimLSlaterAuthor/
https://www.instagram.com/klslaterauthor/
https://twitter.com/KimLSlater
Sign up to be the first to hear about new releases from K.L. Slater here: https://www.bookouture.com/kl-slater