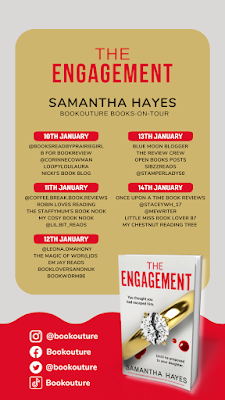 DESCRIPTION:
You thought you had escaped him. Until he proposed to your daughter.‘There’s someone I want you to meet,’ Belle says, as a man draws up to her side. He’s tall with dark hair and stubble on his square jaw. He’s not exactly smiling, but the corner of his mouth curls upwards as he slides his hand around my daughter’s waist.I grab my husband’s arm to steady myself, as the room spins around me.I stare into the man’s eyes – jet black. Nothing and everything hidden behind them.Fear prickles my skin as I remember what he did.How I only just escaped.All the lies I’ve had to tell since.‘I want you to meet Jack,’ Belle says, brimming with excitement. ‘He’s my fiancé.’ She rests her head on his shoulder. ‘Isn’t it exciting? We’re engaged!’Fear hammers in my chest. I have to stop this.My daughter’s life is in danger, and it’s all because of me…A totally gripping psychological thriller from an Amazon No1. bestseller that will take you on a rollercoaster ride of emotions and have you gasping at the twists. Fans of The Housemaid, Gone Girl and The Girl on the Train will be flipping pages all night long!
BUY LINKS:
Amazon: https://geni.us/B0BJL2RHJ2social

Listen to a sample here: https://soundcloud.com/bookouture/the-engagement-by-samantha-hayes-narrated-by-sarah-durham
You can sign up for all the best Bookouture deals you'll love at: http://ow.ly/Fkiz30lnzdo
MY THOUGHTS: 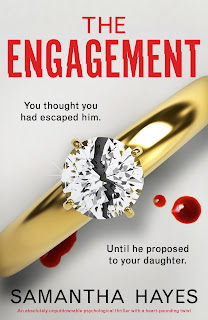 Title:   The Engagement
Author:  Samantha Hayes
Publisher:  Bookouture
Genre:   Psychological Thriller
Format:  Kindle ARC
No. of Pages:   335
Date of Publication:   January 10, 2023
My Rating:   4 Stars
Belle shows up back home a day later than expected. However, after being gone for a few months in France, she comes home with a fiancé in tow, Jack. Her parents, especially her mother, are shocked. Why is her mother even more shocked that her father? Aside from the fact that Jack is at least twice Belle’s age, her mother Hannah recognizes him from her disturbing past, and the man she never hoped to see again is not named Jack.
While Hannah struggles to determine how this man ended up with her eighteen-year-old daughter and what his end game is, her dark past is slowly revealed. Hannah has kept this past a secret, one she never expected to face. It slowly becomes clear that Hannah‘s past was that she was deeply involved in the sex work business. How she came from that to where she is now with what has been a happy marriage with two children and a good life does not even seem possible. Lies and secrets had been working for Hannah but the truth is certain to come to light, and the level of danger that now faces Hannah is certain to upset her carefully orchestrated life.
Samantha Hayes has written a banger of a story, one dark and devastating, full of twists and turns that captured my attention from the very start. This book was impossible to put down, especially when the reader is forced to balance Hannah‘s past with her present while seeing in what ways Jack planned on exposing something she never thought would be revealed. This powerful book delivered a hard punch and came to a close with a shocking ending. Kudos to Ms. Hayes for writing such an effective story.
Many thanks to Bookouture and to NetGalley for this ARC for review. This is my honest opinion.
Please enjoy my YouTube video review -
ABOUT THE AUTHOR: 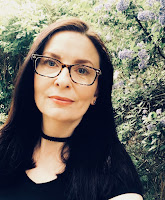 Samantha Hayes grew up in a creative family where her love of writing began as a child. Samantha has written eight thrillers in total, including the bestselling Until You’re Mine. The Independent said “fantastically written and very tense” while Good Housekeeping said “Her believable psychological thrillers are completely gripping.” Samantha’s books are published in 22 languages at the last count.When not writing, Samantha loves to cook, go to the gym, see friends and drink nice wine. She is also studying for a degree in psychotherapy. She has three grown-up children and lives in Warwickshire.https://www.samanthahayes.co.uk/https://www.facebook.com/SamanthaHayesAuthor/https://www.instagram.com/samanthahayes.author/https://twitter.com/samhayes