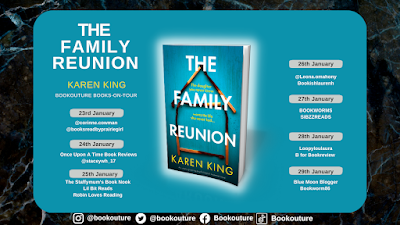 She’s the daughter you never knew… But how far will she go to get the life she never had?

Today I’m hosting a family party. One that’s different to every celebration we’ve had before. Because I’ve invited my secret daughter to it.

I’ve never forgiven myself for abandoning her as a baby, with just a scrawled note tucked into her soft yellow blanket, saying her name was Hope.

As soon as she reached out, I knew I had to meet her. My family all seem ready to accept her with open arms, their forgiveness a blessing I barely deserve. And I dare to believe that maybe we are all going to have a happy ending after all.

So I try to put all those small, strange things that have been happening to me in recent weeks out of my mind. The missing money, my lost charm bracelet, the broken window, the fire…

But as the drinks are poured and everyone’s talking animatedly, I hear a knock at the door. And something in my heart tells me this family is about to be torn apart. And there’s nothing I can do to stop it… 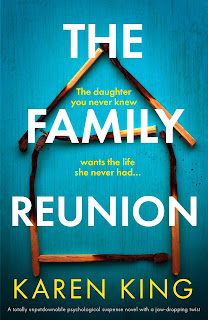 Title:   The Family Reunion
Author:  Karen King
Publisher:  Bookouture
Genre:   Psychological Thriller
Format:  Kindle ARC
No. of Pages:   320
Date of Publication:   January 23, 2023
My Rating:   4 Stars
Mary wants to right the wrongs of the past. Very saddened by the loss of her husband after nearly four decades of being happily married, she decides to deal with something that happened when she was just 16 years of age, something that she kept secret for decades. With two grown children, Joanne and Jason, revealing that secret might change everything about her life.
Mary got pregnant as a teenager and had a child that she felt had no choice but to give up. She named her Hope and she now wants to find her and to introduce her to Joanne and Jason. Mary is hopeful that she will be able to forge a relationship with her. Finding her daughter. whom she learns is now named Cathy just might fill that void in her life as well as bonding her family together now. There is a major complication, and that has to do with Mary’s health, and the fact that Joanne and Jason are pressuring her to sell the family home.
Concerned that their mother might have dementia increases the pressure that Joanne and Jason are placing on Mary. However, she has been reluctant to sell her home, but she suddenly has a change of heart. In fact, Cathy does indeed come back into Mary’s life, and it doesn’t take very long to start to follow every edict that Cathy sets out, which includes going ahead and preparing to sell the home. Both Joanne and Jason are having their own struggles in life, and once their mother sells their home, the proceeds will go a long way into helping them both financially. However,  they both become immediately upset when they learn that Mary intends on splitting the proceeds of the sale among the three of them.
A lot of questions come up in this book. Is Cathy Mary’s long lost daughter? In fact, why is Mary so eager to do everything that Cathy wants her to do? More than that, why are Joanne and Jason so resistant to any changes that Mary starts to make in her life? As I was reading this book, I felt like I was reading a story that included gaslighting. This increased the intriguing nature of this story, all while guilt, secrets, and lies as well as unexplained things happening to Mary keep taking place. What a compelling read that concluded with a jaw-dropping twist.
Many thanks to Bookouture and to NetGalley for this ARC for review. This is my honest opinion.
Please enjoy my YouTube video review -
ABOUT THE AUTHOR: 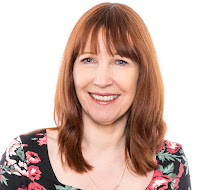 Karen King is a multi-published author of both adult and children’s books. Currently published by Bookouture and Headline, Karen writes about the light and dark of relationships. Her eleventh romantic novel, The Spanish Wedding Disaster, has recently been published and her third psychological thriller The Mother In Law is out in July, with a fourth one in February 2023.

Karen has also had 120 children’s books, two young adult novels, and several short stories for women’s magazines published. Her thrillers The Perfect Stepmother and The Stranger in my Bed and her romantic novel The Cornish Hotel by the Sea became International Amazon bestsellers.

Karen is a member of the Romantic Novelists’ Association, the Society of Authors, the Crime Writers’ Association and the Society of Women Writers and Journalists. She now lives inSpain where she loves to spend her non-writing time exploring the quaint local towns with her husband, Dave, when she isn’t sunbathing or swimming in the pool, that is.