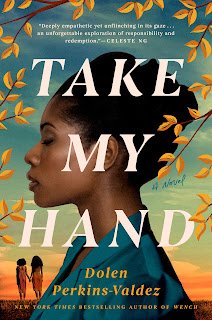 TAKE MY HAND (Berkley Hardcover; April 12, 2022) reckons with the forced sterilization of Black women, inspired by true events in the 1970s American South, for readers of An American Marriage by Tayari Jones and The Personal Librarian by Marie Benedict and Victoria Christopher Murray.

Dolen was inspired to write TAKE MY HAND by a 1973 lawsuit on behalf of Minnie Lee and Alice Relf. The Relf sisters were only twelve and fourteen years old when they were surgically sterilized without their knowledge in a federally-funded Montgomery clinic. At age 29, Joseph Levin—co-founder of the Southern Poverty Law Center—filed a lawsuit on the sisters’ behalf, shining a spotlight on the 150,000 impoverished victims across the county. TAKE MY HAND is a fictionalized account of this significant event.

Montgomery, Alabama, 1973. Fresh out of nursing school, Civil Townsend intends to make a difference, especially in her African American community. At the Montgomery Family Planning Clinic, she hopes to help women shape their destinies, to make their own choices for their lives and bodies.

But when her first week on the job takes her along a dusty country road to a worn-down one-room cabin, Civil is shocked to learn that her new patients, Erica and India, are children—just eleven and thirteen years old. Neither of the Williams sisters has even kissed a boy, but they are poor and Black, and for those handling the family’s welfare benefits, that’s reason enough to have the girls on birth control. As Civil grapples with her role, she takes India, Erica, and their family into her heart. Until one day she arrives at their door to learn the unthinkable has happened, and nothing will ever be the same for any of them.

Decades later, with her daughter grown and a long career in her wake, Dr. Civil Townsend is ready to retire, to find her peace, and to leave the past behind. But there are people and stories that refuse to be forgotten. That must not be forgotten. Because history repeats what we don’t remember.

Inspired by true events and brimming with hope, TAKE MY HAND is a stirring exploration of accountability and redemption.

Link to purchase the book
MY THOUGHTS:
As I begin this review, I would like to share this quote from this heartbreaking book:
"This is your lineage, my dear daughter, your history. More powerful than blood. The story of those sisters and what happened in Montgomery in 1973 is a history you share with people you have never even met. They are your family as much as I am your family."
This fictional novel is a tragic story that is based on the Relf Sisters. Minnie Lee and Mary Alice Relf, then 12 and 14 in 1973 in Montgomery, Alabama. The girls were involuntarily sterilized by tubal ligation at their tender ages.
The girls in this book, 13-year old Erica and 11-year-old India, were so violated that their case went as high as the federal government by means of the Montgomery, Alabama Community Action Program. Whether due to research or the "sterilization law", countless girls and women were experimented on with various forms of birth control.
This devastating book definitely led me straight to Google. The National Museum of American History states that there was a push for new developments in birth control. This led to experiments on poor girls and women of color, including Native Americans, African Americans and other minorities.
This book was instrumental with regard to helping me to learn about something similar that began in 1932 and went all the way to 1972. This was the Tuskegee Study of Untreated Syphilis in the Negro Male or later called the Syphilis Study. The purpose of this study was to observe the effects of the the disease being untreated in nearly 400 men. Over 100 men died as a result of this cruel experiment. The experiment was promised to last six months. Instead it lasted 40 years!!
In modern times, there are certain situations where people are still involuntarily sterilized, like immigrants, some prisoners, etc. A relatable situation is the COVID-19 pandemic and how it has affected the African-American population and the vaccination hesitancy amongst the Black population when people are aware of these historical events surrounding the gross mistreatment of African-Americans and other minority populations.
What a moving story and kudos to Dolen Perkins-Valdez for bringing the story to life as well as reminding us of other terrible travesties inflicted among our minority populations. Stories like these affects our pasts and as the quote that I shared above shows, it is a history we share.
Please enjoy the following YouTube video review -

Many thanks to and to NetGalley for this ARC for review. This is my honest opinion.
ABOUT THE AUTHOR: 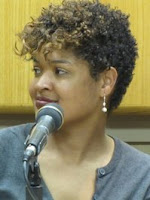 Dolen Perkins-Valdez is the author of the New York Times bestselling novel WENCH. In 2011, she was a finalist for two NAACP Image Awards and the Hurston-Wright Legacy Award for fiction. In 2017, HarperCollins released Wench as one of eight "Olive Titles," limited edition modern classics that included books by Edward P. Jones, Louise Erdrich, and Zora Neale Hurston.
Dolen received a DC Commission on the Arts Grant for her second novel BALM which was published by HarperCollins in 2015. In 2013, Dolen wrote the introduction to a special edition of Solomon Northup's Twelve Years a Slave, published by Simon & Schuster, which became a New York Times bestseller. She followed that with an introduction to Elizabeth Keckly's Behind the Scenes published in 2016. Dolen is a 2020 nominee for a United States Artists Fellowship.
Her forthcoming novel TAKE MY HAND will be published April 2022 by Berkley/Penguin Random House.
Dolen is the current Chair of the Board of the PEN/Faulkner Foundation. On behalf of the foundation, she has visited nearly every public high school in the District of Columbia to talk about the importance of reading and writing. She is currently Associate Professor in the Literature Department at American University and lives in Washington, DC with her family.
web | facebook | Twitter | instagram