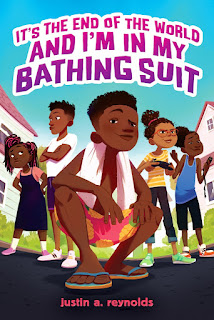 Title:   It's the End of the World and I'm in My Bathing Suit
Author:  Justin A. Reynolds
Publisher:  Scholastic Press
Genre:   Middle Grade
Format:  Print ARC
No. of Pages:   304
Date of Publication:   April 5, 2022
My Rating:   5 Stars
DESCRIPTION:
Twelve-year-old Eddie Gordon Holloway has concocted his most genius plan ever to avoid chores... especially the dreaded L-A-U-N-D-R-Y. If he can wear all the clothes he owns, he'll only have to do the laundry once during his school break.
On the day of the highly anticipated Beach Bash, Eddie's monstrous pile of dirty laundry is found by his mom. And Eddie's day has just taken a turn for the worst. Now he's stuck at home by himself, missing the bash, and doing his whole pile of laundry. But mid-cycle, the power goes out!
With his first load of laundry wet and the rest of his stuff still filthy, he sets out to explore the seemingly empty neighborhood in his glow-in-the-dark swim trunks, flip-flops, and a beach towel. He soon meets up with other neighborhood kids: newcomer Xavier (who was mid-haircut and has half his head shaved), Eddie's former friend Sonia (who has spent her entire break trying to beat a video game and was mid-battle with the final boss), and siblings Trey and Sage (who are dealing with major sibling drama).
As they group up to cover more ground and find out what happened, they realize that their families aren't coming back anytime soon. And as night falls, the crew realizes that they aren't just the only people left in the neighborhood, they might be the only people left... anywhere.
Link to purchase the book
MY THOUGHTS:
Eddie Gordon Holloway is a twelve-year-old boy with a new responsiblity over the summer holiday - his own laundry. Disgusted with the impending chore, Eddie comes up with a fabulous idea - he will wear every stitch of clothing he has and make it so that he only has to do laundry just once this summer. When he gets down to his last item, a pair of swim trunks, Eddie is forced to face the inevitable.
Unhappy that his mother has remarried is only one of Eddie's problems. His older brother is incredibly annoying. Then there is Beach Bash - the ultimate summer party - and the perfect time to ask childhood friend Ava to go steady with him.
Eddie dives in - bad smells notwithstanding - and as he struggles to get his first load of laundry going, the power goes out. In short order, Eddie realizes that the power is out everywhere, and he soon finds himself with four of his friends. In fact, Eddie, his four friends, and who else? No one else. No other kids. No adults. No power. No cell service. And he is in his swim trunks.
What fun! I loved this snarky middle-grade read. In fact, I have only read a small handful of middle grade titles, but I found this one to be quite enjoyable, leaving me more than interested to read more of Justin A. Reynolds books as well as other middle grade titles.

Many thanks to Scholastic Press for this ARC for review. This is my honest opinion.
ABOUT THE AUTHOR: 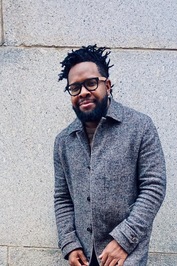 justin a. reynolds has always wanted to be a writer. The earliest documentation of this desire was recorded on a sheet of green, learn-how-to-write-with-a-jumbo-pencil ruled kindergarten paper, which can be found prominently displayed in his mom’s office. OPPOSITE OF ALWAYS, his debut novel, was an Indies Introduce Top Ten Debut, a School Library Journal Best Book of 2019, translated in 17 languages, and is being developed for film with Paramount Players. He hangs out in northeast Ohio with his family, and is probably somewhere dancing terribly, or as his sister likes to say "doing the sports". His second novel EARLY DEPARTURES will publish in September 2020.
It's far more likely you can reach justin via Twitter (@andthisjustin) IG (@justinwritesya) or his website.
web