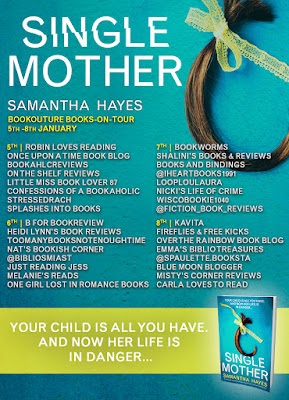 DESCRIPTION:
I will do anything to protect my daughter. She’s all I’ve ever wanted and all I really have, but the moment I opened that letter and accepted the inheritance, I walked us right into a dangerous trap.

I know I should have got her to tell me who she’s been talking to on the phone late at night, and where she was the day I went to pick her up from school and couldn’t find her, but she’s not spoken a word since she found that little pile of bones buried in the garden.

A jaw-dropping, addictive and totally twisty psychological thriller that will have you sleeping with the light on! Perfect for anyone who loved The Girl on the Train, Friend Request or The Wife Between Us. 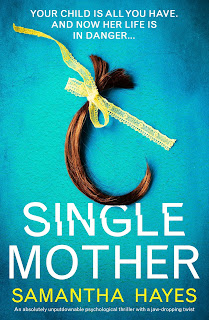 Title:   Single Mother
Author:  Samantha Hayes
Publisher:  Bookouture
Genre:   Psychological Thriller
Format:  Kindle ARC
No. of Pages:   357
Date of Publication:   January 5, 2021
My Rating:   4 Stars
Mel has nowhere to turn. She is a single mother of a preteen and is struggling beyond belief. Then she gets unfairly fired from her job. She was already pinching pennies to keep them fed and housed. However, she receives a letter from a solicitor stating that she has received a rather large inheritance.
Mel is confused. As someone who grew up in the foster care system she cannot imagine how this could be. She does investigate things and it seems to be true. Despite things suddenly changing for her and her daughter Kate, she begins to have grave concerns about Kate.
Meanwhile there is another character who is rather interesting in this developing drama. So, Mel starts to unravel her new life, watches carefully for changes involving Kate, and deals with old and new people in her life. All the while she struggles with fear from someone from her past, someone who might play into some of the drama she begins experiencing.
What a story! Intense on many levels, with an air of mystery that I did not expect. In fact, there were some significant twists and turns that really caught me off guard, making me even more interested in this story. While the drama played along nicely at an excellent pace, the last few chapters really sped things up, even changing the direction of the story. The ending was a true shocker. Well done!
Many thanks to Bookouture and to NetGalley for this ARC for review. This is my honest opinion.
ABOUT THE AUTHOR: 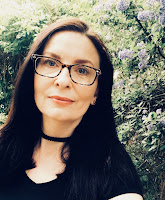 Samantha Hayes grew up in a creative family where her love of writing began as a child. Samantha has written eight thrillers in total, including the bestselling Until You’re Mine. The Independent said “fantastically written and very tense” while Good Housekeeping said “Her believable psychological thrillers are completely gripping.” Samantha’s books are published in 22 languages at the last count.

When not writing, Samantha loves to cook, go to the gym, see friends and drink nice wine. She is also studying for a degree in psychotherapy. She has three grown-up children and lives in Warwickshire.