BLOG TOUR - Before She Wakes 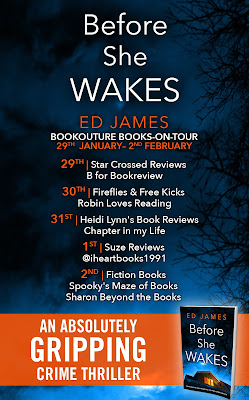 DESCRIPTION:
She opens her eyes and focuses on the room around her. Everything is in place, yet something isn’t right. She walks towards her daughter’s room, calling her name, as she does every morning. But this morning is different. This morning there is no response. Marissa’s daughter has vanished.

Single mother Marissa stands in her daughter’s untidy room. Olivia’s phone is still charging at the wall and her clothes are still hanging in her closet. The mirror above her daughter’s desk is cracked and a message written in red ink reads ‘Never Forget’.

When the investigation into Olivia’s disappearance makes local headlines, people begin to gossip about the missing teenager and it soon becomes clear she had been lying to her mother for a long time. Not only did she have a secret boyfriend, but she had also been talking to her guidance counsellor constantly in the weeks before she disappeared. What was so big that Olivia couldn’t tell?

And when a blood test reveals that Marissa was drugged the night Olivia went missing, fingers point at Marissa’s estranged husband, but he too has vanished without trace. Could a long-buried family secret have put the teenager’s life in danger? And will the truth be revealed before it’s too late for the missing girl?

Fans of Melinda Leigh, Kendra Elliott and Mark Edwards will love this pulse-racing crime thriller from bestselling author Ed James. Before She Wakes will keep you up all night! 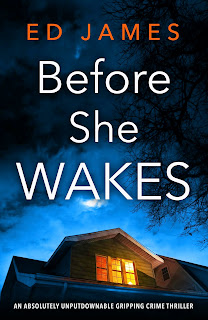 Title:   Before She Waits
Author:  Ed James
Series:  Detective Max Carter #3
Publisher:  Bookouture
Genre:   Mystery/Thrillers
Format:   Kindle ARC
No. of Pages:   294
Date of Publication:   January 29, 2021
My Rating:   4 Stars
When Marissa Bukowski goes to check on her daughter one morning, she discovers that the teenager is not in bed. Frantic, especially seeing that her daughter Olivia's phone, laptop and clothing are there as if nothing is wrong, but at the same time there was a warning message left. What happened to Olivia?
Max Carter is an FBI agent that steps in to investigate Olivia's disappearance. Carter begins to see that a few things do not add up. Then there is something specific about Marissa that points Carter towards her estranged husband, but that does not help him draw any closer to answers. To make all matters worse, Carter discovers something about the family that just might point to the reason that Olivia is nowhere to be found. Not only is Carter with this case, but his own past comes into play.
While Carter searches for answers about Olivia, facts about his painful past begin to unravel, sharpening memories once lost. It is this very past that makes Carter so good at his job when it comes to locating missing children. This story has quite a bit of drama behind the possible reasons for what could have happened to Olivia, all while loose ends of his own life begin to come together.
This third book in the Detective Max Carter series brings quite a bit to the table. I have read the previous two books in the series, Tell Me Lies and Gone in Seconds had have come to have a lot of respect for Max and how he has become such a fine agent. I loved the intensity of this story and look forward to reading the next book in this series.
Many thanks to Bookouture and to NetGalley for this ARC for review. This is my honest opinion.
ABOUT THE AUTHOR: