BLOG TOUR - The One Before 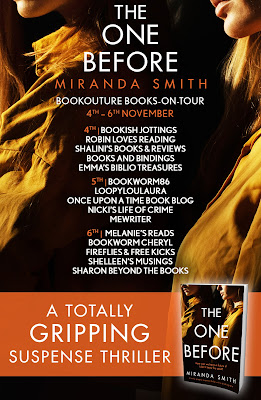 DESCRIPTION:
I love him. I trust him… But what if I’m wrong?

Whisper Falls is a fresh start for Madison and her fiancé Cooper. The safe, quiet town on the shores of a beautiful lake is the perfect place to spend the rest of their lives.

But then Madison learns that Cooper’s high-school girlfriend Celia disappeared after a party. Three days later, her body was found in the lake.

And the town thinks it wasn’t an accident.

Madison loves Cooper, but she can’t help wondering. She has to know the truth.

But if she starts asking questions, what other secrets will be revealed? Will she meet the same fate as the woman who came before her?

A dark, gripping psychological thriller with a brilliant twist, The One Before is perfect for fans of Karin Slaughter, Gillian Flynn and Rachel Caine. 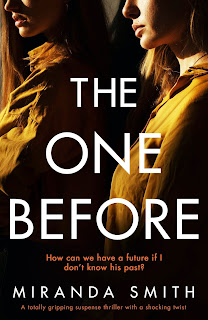 Title:   The One Before
Author:  Miranda Smith
Publisher:  Bookouture
Genre:   Psychological Thriller
Format:  Kindle ARC
No. of Pages:   294
Date of Publication:   November 4, 2020
My Rating:   5 Stars
Not only is Madison quite pleased to be engaged to Cooper, she has given everything up to start over with him in the small town of Whisper Falls. However, a shroud of doubt and concern begin to weigh heavily on her as his past relationship begins to be concerning. While in high school Cooper's girlfriend disappeared. After her body was then found, all fingers pointed to him. Cooper's family helped him escape from blame back then. Now, however, it seems that someone is bound and determined once and for all to prove that Cooper had something to do with the girl's death.
Madison begins to doubt Cooper, thus upsetting any plans for a forever future with him. Meanwhile, someone in their lives now has ulterior motives, thus placing Madison's hopes and dreams for a long life with Cooper in jeopardy. Could Cooper have been responsible all those years before? Does she even know the man she is about to marry?
As things begin to unravel for Madison and Cooper, the tension in this book begins to be wound very tightly, thus making this to be quite a thrilling read. Actually, the story begins to take on a chilling effect as events of the past begin to clash with what is going on currently for the couple. So much so that I was completely thrown off. I loved that Madison did not take things at face value, even if it meant there was the possibility for her to discover things were not as they seemed.
I loved the fact that Madison's job played into her curiosity about past events. The fact that she was a reporter played into her skills when it came to unraveling facts. Then there was the bevy of characters who were not all they seemed. I also loved the pieces of the puzzle that were placed before us as readers as we began to doubt Cooper just as Madison was beginning to. The ride was definitely a fun one, full of conflicting twists and turns, some shocking red herrings and a a twist that completely threw me off-guard.
In addition to those things I loved the character who played into upsetting any plans of happiness that Madison and Cooper might have, and watching that play out gave this excellent read an extra layer of intensity. Miranda Smith has written a compelling story and I am more than pleased to have been able to read it. I cannot wait to see what else she has in store for us readers.
Many thanks to Bookouture and to NetGalley for this ARC for review. This is my honest opinion.
ABOUT THE AUTHOR:

Miranda Smith writes psychological and domestic suspense. She is drawn to stories about ordinary people in extraordinary situations. Before completing her first novel, she worked as a newspaper staff writer and a secondary English teacher. She lives in East Tennessee with her husband and three young children. https://mirandasmithwriter.com/https://www.facebook.com/MirandaSmithAuthor/https://twitter.com/msmithbookshttps://www.instagram.com/mirandasmithwriter/