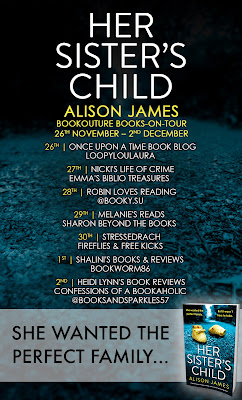 DESCRIPTION:
She rolls over and reaches for her instinctively: her baby. Her hand hits air and flaps redundantly. She stumbles out of bed and switches on the light. But this only confirms it. The baby is gone. Someone has taken her.

Her sister Paula swore she would do everything she could to find the child. If she hadn’t promised to keep Lizzie's pregnancy secret, maybe the baby wouldn’t have disappeared. And maybe Lizzie would still be alive. But, in nearly a decade, Paula’s never found any trace. Until now…

When Paula bumps into an old friend from the past, she realises she wasn’t the only one who knew about her sister’s child. Someone knows what happened that day. Someone knows where Lizzie’s baby went.

But can Paula find out the truth before another family is ripped apart?

A twisty, unputdownable psychological thriller that will keep you hooked until the last page. Fans of Behind Closed Doors, Friend Request and The Girl on the Train will love Her Sister’s Child. 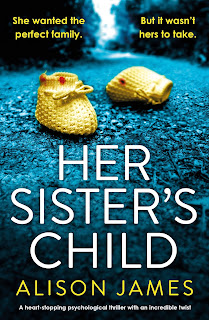 Title:   Her Sister's Child
Author:  Alison James
Publisher:  Bookouture
Genre:   Psychological Thriller
Format:  Kindle ARC
No. of Pages:   320
Date of Publication:   November 24, 2020
My Rating:   4 Stars
In this gripping psychological thriller, Paula Armitage has never gotten over the fact that her sister Lizzie at first disappeared years ago and then was found dead. What is more is that at the time Lizzie was pregnant, and she kept this a secret from their mother. To add to this, Lizzie's baby completely disappeared at the time, and this fact remained secret for years as well.
As the story fast forwards to the present, Paula decides it is high time to try and discover what happened to the baby. There are two other principal characters in the story, a social worker named Marian and a young girl - actually a teen mother - named Charlie. What do Paula, Marian and even Charlie all have in common and what are the threads that are slowly pulled together that eventually work to connect them?
As the drama unfolds we learn what happened when Lizzie died. Then we see the drama that Charlie experiences. We also see the actions of Marian, who was a social worker at the time. The drama is heightened when Charlie, who was living with her boyfriend at the time, is about to return home to her parents with her newborn baby. Something terrible happens and it is this very action that begin to pull this thrilling story together.
I love how this story was told - seemingly from three different perspectives - leaving the reader clues ass to how each of them would indeed connect. Beyond being a thriller, this story was quite emotional on several levels, even shocking at times. As I was reading this story, my heart broke at times, and I could not help but wonder if there would be any type of good resolution. This book was impossible to put down and proved to be an excellent read.
Many thanks to Bookouture and to NetGalley for this ARC for review. This is my honest opinion..
ABOUT THE AUTHOR: 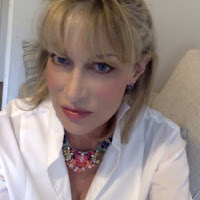