DESCRIPTION:
In this hilarious and heartbreaking debut novel perfect for fans of Fleabag, a woman struggling to move on after a traumatic relationship pretends to be “the perfect girl” in an act of vengeance that goes awry when she finds herself emotionally compromised.

He said he was looking for a 'partner in crime' which everyone knows is shorthand for 'a woman who isn't real'.

April is kind, pretty, and relatively normal - yet she can't seem to get past date five. Every time she thinks she's found someone to trust, they reveal themselves to be awful, leaving her heartbroken. And angry. Until she realizes that what men are really looking for is Gretel.

Gretel is perfect - beautiful but low maintenance, sweet but never clingy, sexy but not a slut. She's a Regular Everyday Manic Pixie Dream Girl Next Door With No Problems.

When April starts pretending to be Gretel, dating becomes much more fun - especially once she reels in the unsuspecting Joshua. Finally, April is the one in control, but can she control her own feelings? And as she and Joshua grow closer, how long will she be able to keep pretending?
BUY LINKS:
Barnes & Noble | Amazon | Apple Books
Kobo | Google Books | Bookshop.org
MY THOUGHTS: 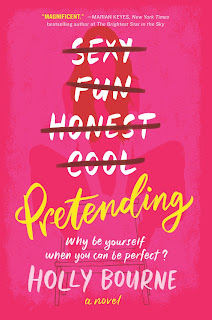 Title:   Pretending
Author:  Holly Bourne
Publisher:  Hodder & Stoughton
Genre:   Women's Fiction
Format:  Kindle ARC
No. of Pages:   416
Date of Publication:   November 17, 2020
My Rating:   4 Stars
Well over 100 times. What, may you ask? The phrase "I Hate Men". I must to admit asking myself why I kept reading a book that opened with and kept using that very phrase. But, read on I did and I truly get why our primary protagonist April had that view of men. Dating was an ultimate fail for April and she truly wants that to change that.
Then there is Gretel. The ideal woman as far as April is concerned. So, in her own way she begins to catfish her future dates by becoming the true embodiment of the person Gretel is - brash, beautiful, fun and more. When April is Gretel she has confidence, confidence she never had before. However, all the while the men she begins to meet continue to disappoint her in one way or another. Then, April meets Joshua - as Gretel - and things begin to look up.
What will April do now? How will she be able to become herself without losing Joshua once he discovers the truth?
There is a catch while reading this book. It is THE very reason April hates men and this is where this review is forced to take on a more serious note. April dealt with sexual assault in a previous relationship. This makes it necessary to present the reader of this review with a trigger warning. I never had the exact experience that April had, but I had enough of life's bad experiences that this was almost enough to stop me from reading this book more than once.
That being said I did read the book through. I really got into April's head and even her heart. I could see why she felt she had to become someone else, and I really began to feel for her when it seemed she finally found the right guy. This led me to want to know how that would work itself out.
This book is said to be humorous. That would be about my only real negative beyond the triggering effect this book had. I felt it to be quite serious, even if April went through a comedy of errors during some of her dates.
So, dear reader, if you can get past the negative points I bring out in this review, then take this book, grab a cup of coffee and find a comfortable spot and take the ride with April/Gretel/April as we see her looking for love. I think as this book deals with serious issues it does indeed deliver important and powerful lessons.
Having not read Holly Bourne before I cannot speak as to whether or not this is her style of writing. But, for an American debut novel, she certainly has made herself stand out.
Many thanks to Hodder & Stoughton and to NetGalley for this ARC for review. This is my honest opinion.
Please enjoy the following excerpt:
ABOUT THE AUTHOR: 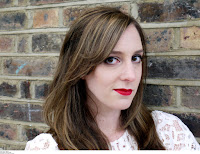 Holly Bourne is a bestselling UK-based YA and Adult Fiction author and is an Ambassador for Women’s Aid. In 2019, she was an Author of the Day at the London Book Fair, and was named by Elle Magazine’s weekly podcast as one of “Six Female Authors Changing the Conversation in 2019”. Pretending is her US debut.