BLOG TOUR - Thank You Next 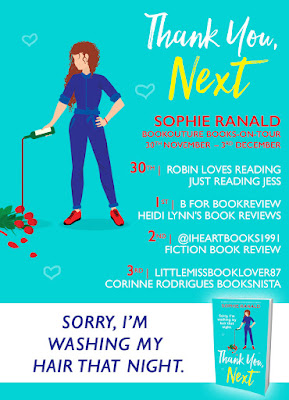 DESCRIPTION:
Seriously, why do guys on dating apps think I want a picture of what’s in their pants? I could open an art gallery with the collection I’ve got.

Zoe really doesn’t want to die alone and surrounded by cats. But it’s not looking good: she’s had sex precisely twice in the last year, and her feline friend isn’t the kind of male company she wants in bed…

Her top dating disasters include:

1) The guy who kissed her hand, took out a violin and serenaded her in public.
2) The guy who force-fed her oysters (she can confirm that they’re not an aphrodisiac).
3) The guy who was so hungover he turned up with his t-shirt on inside out, sweating sambuca.
4) The guy who brought his actual kid on a dinner date.

And don’t even get her started on the dick pics, or how on earth you’re supposed to know whether a total stranger is an axe murderer or not.

Zoe's ready to give up on the search for love, until her friend has an idea. Robbie lives by his horoscope, and he’s sure she’s got this dating stuff all wrong. He dares her to work her way through the zodiac until she finds The One.

Usually Zoe would laugh at such a suggestion, but desperate times call for desperate measures. Could love be written in the stars? Or is she destined to end up alone, eating take-out in bed and watching endless re-runs of Friends?

A feel-good, fresh and fabulous page-turner for anyone who has torn their hair out over their love life, drunk their weight in wine to survive an awful date, or stared at their phone, willing it to ring. Fans of rom-coms by Sophie Kinsella and Lindsey Kelk and TV shows like Crazy Ex-Girlfriend and Jane the Virgin will absolutely love this laugh-out-loud tale. 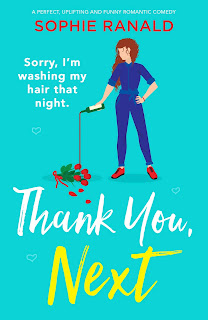 Title:   Thank You Next
Author:  Sophie Ranald
Publisher:  Bookouture
Genre:   Humor; Romance
Format:  Kindle ARC
No. of Pages:   241
Date of Publication:   November 30, 2020
My Rating:   4 Stars
No matter what Zoe does or who she meets her dates simply do not work out. Dating for Zoe proves to be one disaster after another. Zoe decides to take online dating to a whole new level, and that is by using a horoscope dating app to find the perfect man.
Her series of dates were interesting, to say the least. Just one example: a date where she was serenaded then treated abominably when she told the guy she wasn't interested. Next. Next. Next. One zodiac guided date after another leads to bigger and bigger disasters. However, Zoe refuses to give up. There has to be the right guy out there. Somewhere.
Zoe's number one confidant is good friend and employee Robbie. Bouncing scenarios and ideas off of him, Zoe is determined to find the right man, no matter how many duds she runs into along the way.
This quick read by Sophie Ranald was an enjoyable read, easily devoured in one sitting. To imagine people going through what Zoe did in this book was indeed cringeworthy at times, but love is something most people want. For this book to be considered humor was a bit of a stretch to me because Zoe's disappointment was more than palpable.
Zoe's job as a chef and her friendship with Robbie were nice aspects of this book. There were some very serious moments in this book, especially concerning another friend of Zoe's, Dani. Finally, I especially loved the fact that Zoe did seem to zone in on the right guy, despite the uncertainty she faced. Watching her travel the ride from internet dating to true love was quite enjoyable to read.
Many thanks to Bookouture and to NetGalley for this ARC for review. This is my honest opinion.
ABOUT THE AUTHOR:

Sophie Ranald is the youngest of five sisters. She was born in Zimbabwe and lived in South Africa until an acute case of itchy feet brought her to London in her mid-20s. As an editor for a customer publishing agency, Sophie developed her fiction-writing skills describing holidays to places she'd never visited. In 2011, she decided to disregard all the good advice given to aspiring novelists and attempt to write full-time. After one false start, It Would Be Wrong to Steal My Sister's Boyfriend (Wouldn't It?) seemed to write itself. Her second, third and fourth novels followed. Sophie also writes for magazines and online about food, fashion, finance and running. She lives in south-east London with her amazing partner Hopi and Purrs, their adorable little cat.

To find out about Sophie's forthcoming releases and get access to free books and special offers, sign up to her newsletter at sophieranald.com
or