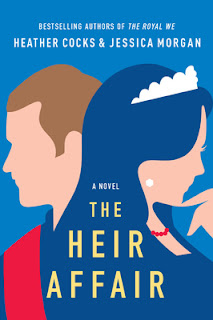 After a scandalous secret turns their fairy-tale wedding into a nightmare, Rebecca "Bex" Porter and her husband Prince Nicholas are in self-imposed exile. The public is angry. The Queen is even angrier. And the press is salivating. Cutting themselves off from friends and family, and escaping the world's judgmental eyes, feels like the best way to protect their fragile, all-consuming romance.

But when a crisis forces the new Duke and Duchess back to London, the Band-Aid they'd placed over their problems starts to peel at the edges. Now, as old family secrets and new ones threaten to derail her new royal life, Bex has to face the emotional wreckage she and Nick left behind: with the Queen, with the world, and with Nick's brother Freddie, whose sins may not be so easily forgotten—nor forgiven.

Well, Bex and Nick barely managed to get married in the first book, The Royal We, but the scandal that came before their wedding caused the couple to flee. The couple are commoner Rebecca Porter and Prince Nicholas, now Duke and Duchess. They manage to spend a couple of months in exile, a decision of their own choosing. Everyone else in the royal family, however, must deal with the ugly aftermath of the events that occurred before the wedding.

After a call that rather terrifies Nick, they flee back to the castle and literally everything begins to crumble around them. Secrets of old might just be enough to completely unravel the family's future. Meanwhile, Bex and Nick must deal with his brother Freddie, their father and their grandmother, the Queen.

I loved the first book in this series, but this one hit me in a different level. There were a lot of powerful family dynamics in this book. The various relationships and emotions were a prominent part of The Heir Affair. Their issues were so powerful and really gave me pause. Forgiveness was key in this book, as well as what true love is and the exploration of soul mates.

I absolutely adored all the various characters in this book - not only Bex and Nick, and of course, Freddie, but also Bex's twin sister, Lacey, Prince Dick, who really had to step up in this book, the grandmother, Queen Eleanor, who I absolutely adored, and even the Queen mother and her love of the internet. The evolution of situations and emotions in this book was handled remarkably well. Lastly, I loved a character we only met via recounting the past, Georgina. What a well-rounded book bringing all of these characters together.

I am a die-hard fan of continuity, and so I read the first book last month. I really don't think readers would get the full impact of this book without reading The Royal We. The two go hand in hand. So, if you like reading about royal families, albeit fictionalized, then this book - and series - are for you.