BLOG TOUR - Death at the Dance 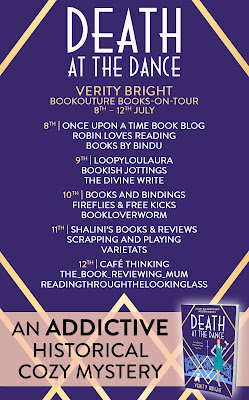 Today is my stop on the Blog Tour for Death at the Dance by Verity Bright.

A masked ball, a dead body, a missing diamond necklace and a suspicious silver candlestick? Sounds like a case for Lady Eleanor Swift!

England, 1920. Lady Eleanor Swift, adventurer extraordinaire and reluctant amateur detective, is taking a break from sleuthing. She’s got much bigger problems: Eleanor has two left feet, nothing to wear and she’s expected at the masked ball at the local manor. Her new beau Lance Langham is the host, so she needs to dazzle.

Surrounded by partygoers with painted faces, pirates, priests and enough feathers to drown an ostrich, Eleanor searches for a familiar face. As she follows a familiar pair of long legs up a grand staircase, she’s sure she’s on Lance’s trail. But she opens the door on a dreadful scene: Lance standing over a dead Colonel Puddifoot, brandishing a silver candlestick, the family safe wide open and empty.

Moments later, the police burst in and arrest Lance for murder, diamond theft and a spate of similar burglaries. But Eleanor is convinced her love didn’t do it, and with him locked up in prison, she knows she needs to clear his name.

Something Lance lets slip about his pals convinces Eleanor the answer lies close to home. Accompanied by her faithful sidekick Gladstone the bulldog, she begins with Lance’s friends – a set of fast driving, even faster drinking, high-society types with a taste for mischief. But after they start getting picked off in circumstances that look a lot like murder, Eleanor is in a race against time to clear Lance’s name and avoid another brush with death… 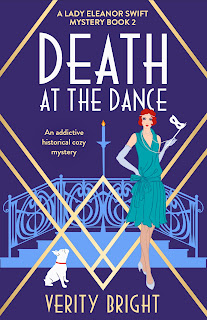 In the second book of this engaging cozy mystery series, Lady Eleanor (Elle) Swift is a bit hesitant to attend a masked ball at the home of her friend Lancelot's family's manor. She still hasn't gotten adjusted to her new role as a Lady in her own manor. What's more is that just as Elle was settling into her new life, she took on another role - an amateur sleuth. Now, while at the ball, when her dear friend - and beau - Lancelot is arrested for murder, Elle quickly dons her her hat and seeks to not only prove Lance's innocence, but also plans on discovering the murderer.

Elle begins her inquiries, leaving no stone unturned, especially as there is definitely more than one likely suspect. It soon proves evident that Elle must act quickly, as there are other murders. So not only must Elle help Lance, it doesn't take her much time to fall into danger, with her very life at risk yet again.

This is exactly my type of book! I love Elle, and her little sidekick Gladstone, a proper bulldog who is always by her side. Not only did I enjoy Elle and Gladstone in both books in this series, but there is also Clifford, Elle's butler at the manor. He is great! I love how he is always there - not just to advise Elle, but helping her in ways that she is grateful for.

This is a fun mystery where I was kept guessing throughout. Of course the time frame was fun too, 1920's England. As much as I enjoyed Agatha Christie in years past, I wasn't a huge Miss Marple fan - I had too much fun with Hercules Poirot. Well, by reading both books in this series, I now feel like I should grab a hold of some of the Marple books. I didn't know what I was missing, so I love that my interest was piqued by reading these books by Verity Bright. I cannot wait see what else Elle, et al, have in store in future books. 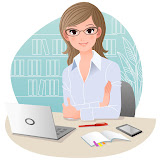