BLOG TOUR - Murder at the Playhouse 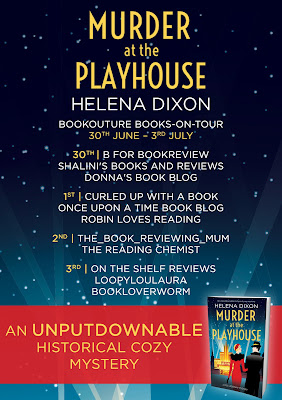 Today is my stop on the blog tour for Murder at the Playhouse by Helena Dixon. Last year I read the first book in the A Miss Underhay Mystery Series, Murder at the Dolphin Hotel, but hadn't read the second book, Murder at Enderlay Hall, so that review is included in this blog post. 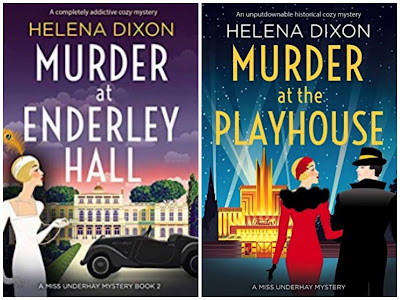 Summer 1933. Fresh from the discovery that she has family living nearby, Kitty Underhay has packed her carpet bag, commandeered a chambermaid and set off on a visit to stately Enderley Hall. She’s looking forward to getting to know her relatives, as well as the assembled group of house guests. But when elderly Nanny Thoms is found dead at the bottom of the stairs after papers of national importance are stolen, Kitty quickly learns that Muffy the dog’s muddy paws on her hemline are the least of her problems.

Calling on ex-army captain Matthew Bryant for assistance, Kitty begins to puzzle out the mystery. And when more shocking murders follow, the stakes are raised for the daring duo as never before. Which of the guests stand to gain from the theft of the documents? And which, as the week progresses, stand to lose their lives?

Kitty cannot help but think of some very difficult experiences with a previous murder that happened at her hotel. Having inherited it from her grandmother, who has taken a back seat to heavier responsibilities, Kitty certainly has her hands full. Despite her new duties, Kitty proved to be quite successful at her turn with being an amateur detective. She had quite a bit of assistance from ex-army captain Matthew Bryant. Matt was hired by Kitty’s grandmother due to disturbing events at the hotel. Although things look okay for now, Kitty and Matt are sure to cross paths again - and soon.

Kitty has taken a break away from the hotel to try and connect with relatives she was previously unaware of, and so she sets off to visit Enderley Hall. Kitty is extremely excited to have the chance to meet her fathers family. With a house party on the agenda, her eagerness intensifies. So, she sets off with her maid Alice. Things start off quite nicely. However, her eager visit is quickly thwarted when some very important papers were stolen.

Kitty knows she must look into the theft, and doesn’t hesitate to call on Matt for his assistance once again. The pair must work hard and fast, especially when the elderly Nanny Thoms is found lying dead at the bottom of the stairs. With Inspector Grenville also on hand taking the lead in the investigation, it is soon hoped that they can get to the bottom of things.

Murder at Enderley Hall is the second book in the delightful cozy series, A Miss Underhay Mystery. I love Kitty and Matt together. Considering the time period in which this book was written, Kitty was often forced to take a step back when investigating the murders, especially the inquiries. It was still pretty much a man’s world at that time. Yet the pair work remarkably well together. Between their obvious affection for one another, and in part displayed by excellent body language, they get the job done.

Not only do Kitty and Matt pay constant vigil to whatever it is before them, their pasts continue to converge together in such a way that I certainly hope they find a future together. This no doubt will prove quite difficult, as Matt’s war experiences - and memories- were horrible. Combined with the fact that he previously lost his wife and daughter, this gives Matt much to deal with before opening his heart again.

I thoroughly enjoyed this entry in what promises to be an excellent cozy mystery series. I love the time period and the locations, and also the snippets of Kitty's and Matt's pasts that we are sure to learn more about in future books. 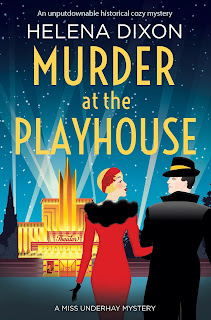 The scene is set for murder… and Kitty Underhay’s partner has been cast as the killer.

Late Summer, 1933. After a quarrel with too-plucky-for-her-own-good amateur sleuth Kitty Underhay, dashing ex-army captain Matthew Bryant is nursing his wounds, and a tumbler of brandy, when there’s a heavy knock at the door and he finds himself arrested for murder. The body of aspiring actress Pearl Bright has been found, strangled with one of Matt’s own bootlaces, and the evidence seems to be stacked against him.

The local constabulary might have locked Matt up, but before they can throw away the key, Kitty hears the news and hies to his aid, determined to prove his innocence. And when her investigations lead her to the home of retired theatre impresario Stanley Davenport, and the local amateur dramatics society, Kitty uncovers a web of deceit that stretches far beyond the stage make-up. But Kitty’s digging is bringing her to the attention of the killer. Without her partner in crime-fighting, can Kitty expose them and clear Matt’s name? Or will it be curtains for them both?

Kitty Underhay likely thought solving more than one murder was more than enough for her. Already quite busy with her hotel, and the time she spends with her grandmother is quite enough. Still reeling after a heated argument with dear fried, ex-army captain Matthew Bryant, Kitty is unbelievably shocked when she discovers constables knocked at his door to arrest him for the murder of his neighbor, a young actress.

Kitty has no doubt that Matt is innocent, and will do anything to clear his name. While Kitty often wonders if there is any future between her and Matt, she has her own mystery to solve. So it seems that Kitty is deemed to certainly be an amateur detective. Despite the objections of the inspector in charge of the case, Kitty leaves no stone unturned when it comes to proving Matt's innocence. As she delves into things, she finds herself at the home of Stanely Davenport, a man previously very involved with everything to do about the theater.

Quite naturally, the more Kitty digs, the closer she comes to unveiling the real murderer, thus placing herself in great risk, as she has done at least a couple of times before. Despite her ardent efforts to clear Matt's name, Kitty is still searching for information about her mother, as she had gone missing years ago. Can the pair work to work both matters out? Or will they both end up losing their lives in the process?

I am truly loving this series by Helena Dixon. Both Kitty and Matt are quite likable characters. I love their slow romance, one built on friendship, affection and shared purposes. I am very much looking forward to continuing this series and to see when they finally become a couple, especially with Matt's past military past, trauma and other losses. Their age difference works for me as well, as I think he is perfect for Kitty. Another thing I like about the series is that Kitty is a strong young woman, intelligent, focused and caring. So, this was an enjoyable treat for me to read. 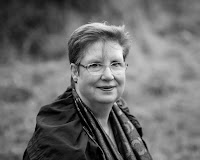