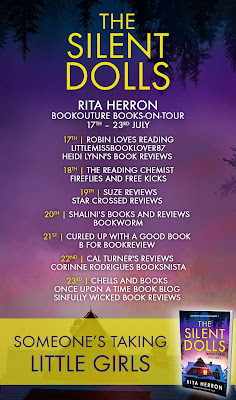 Today I am pleased to be part of the Blog Tour for The Silent Dolls by Rita Herron.

Silent tears trickle down her cheeks as she curls inside the tiny cave-like space. She lies on her side, darkness all around her, rubbing her fingers over the little wooden doll he’d carved. He told her to be quiet, not to cry or scream. Not to be a baby. Her throat was raw, her eyes swollen shut. She wanted her mommy and daddy. She wanted to go home.

When Penny Matthews, a seven-year-old girl with blonde curls and a gap-toothed smile, goes missing in the Appalachian mountains, Detective Ellie Reeves is called straight to the scene. According to Penny’s parents, their daughter vanished after a picnic by the creek. All that’s left behind is a pink friendship bracelet etched with “Penny”.

Ellie knows all too well that the mountains’ endless miles of dark forest and winding rivers are the perfect place for a criminal to hide. Racing against the rapidly setting sun and a brutal winter storm on the horizon, she searches desperately for Penny.

Special Agent Derrick Fox is determined to join the hunt. His younger sister, Kim, disappeared in the same area twenty-five years ago––on the day he was meant to be watching her. He’s certain the cases are linked and that over a dozen girls have vanished in the last decade. Ellie refuses to believe that their tight-knit mountain community could be home to a deadly criminal, but even she can’t deny the similarities in the cases. And when they discover the remains of a small body buried with a carved wooden doll, it’s clear they’re up against a deadly serial killer preying on innocent little girls.

As the temperature plunges, Penny’s life hangs in the balance. Most people who get lost in the woods never make it out alive. Can Ellie and Derrick defy the odds and find out the truth about all the stolen girls? Or will the mountain, and its twisted killer, claim another victim? 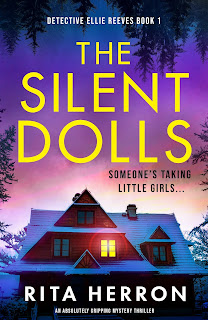 In this riveting book by Rita Herron, a little girl has been taken. She is in a very tight space, in the dark, and is holding a tiny wooden doll carved by her abductor. Well, the young girl that is missing is seven-year-old Penny Matthews and Detective Ellie Reeves is on the case. Quite naturally, her parents are devastated, especially as Penny was lost in the Appalachian Mountains. What a vast area for Ellie and others to begin their search!

As Ellie dives into things she is approached by Special Agent Derrick Fox. Decades ago, his younger sister Kim was lost in the exact same area. Derrick has always felt responsible for what happened to Kim. What's more is that he is positive that the two cases are connected, despite the twenty-five year gap between the kidnappings. What's more is that Derrick feels that this is a serial case, as their are other unsolved kidnappings of young girls.

What a thrilling story! We not only worry about Penny, as time is of the essence when it comes to finding her. Not only do readers get Ellie's and Derrick's points of view while reading this book, but also that of the killer. That made this story all that more chilling. We also get Penny's perspective, and that definitely kept me even more riveted to the story, as her fear was palpable. There is also some drama in this story beyond the kidnapping, and that involves Ellie's father. If or how this relates to what is going on is up to the reader to discover.

As The Silent Dolls is the first book in a new series, readers get to know Ellie, especially as to what drives her to do the best job possible, no matter how difficult the circumstances. I found this case, the character development and the writing all worked together to keep my attention throughout. I look forward to the next book in this series.

USA Today Bestselling and award-winning author Rita Herron fell in love with books at the ripe age of eight when she read her first Trixie Belden mystery. But she didn't think real people grew up to be writers, so she became a teacher instead. Now she writes so she doesn't have to get a real job.With over ninety books to her credit, she's penned romantic suspense, romantic comedy, and YA novels, but she especially likes writing dark romantic suspense and crime fiction set in small southern towns.Author Social Media Links:Facebook: https://www.facebook.com/authorritaherron/Twitter: https://twitter.com/ritaherronWebsite: www.ritaherron.com