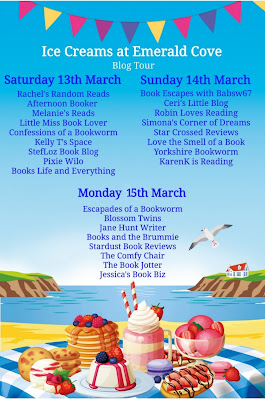 DESCRIPTION:
Escape to the Cornish coast this spring with a trip to the beautiful Emerald Cove, where the sea sparkles in the sunshine, the sand glitters like gold, and true love is in the air. From the bestselling author of Sunrise over Sapphire Bay comes this gorgeously romantic and uplifting tale.
Skye Philips and Jesse Hamilton have a complicated relationship. They’ve been neighbours, best friends and even briefly married. But ever since Skye returned to the beautiful shores of Jewel Island to help her sisters Aria and Clover run their family hotel, she doesn’t know where she stands with Jesse.
When they’re together the chemistry between them sizzles, but with Jesse living in Canada and Skye on the Cornish island she calls home, they’ve kept things casual. Till now…
Jesse is coming to Jewel Island for the annual Pudding Parade and Skye knows this is her chance to tell him how she really feels. But putting her heart on the line isn’t easy when it’s been broken in the past. Will Jesse return her love? Or will she lose him for good?
Everything she's ever wanted can be hers if she's willing to take the chance, but is Skye brave enough to risk her heart once again?'
Set sail to the Cornish coast where sunshine, laughter and romance awaits. This stunning love story is guaranteed to steal your heart this summer; it’s the perfect read for fans of Sarah Morgan, Veronica Henry and Jill Mansell. 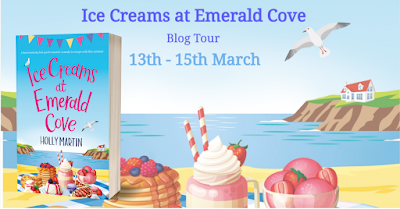 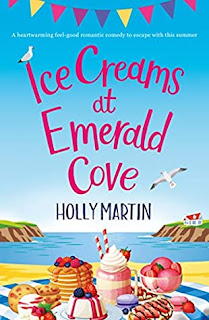 Title:   Ice Creams at Emerald Cove
Author:  Holly Martin
Series:  Jewel Island #3
Genre:   Romance
Format:  Kindle ARC
No. of Pages:   316
Date of Publication:   March 12, 2021
My Rating:   5 Stars
MY THOUGHTS:
In this delightful third book in the Jewel Island series, Skye Philips and Jesse Hamilton try to navigate their on and off romantic relationship. Friends with benefits, long distance at that - her in England and him in Canada, does not make sorting out their feelings for one another very easy. They do have a past that connects them however. They were married for a brief year several years ago. Meanwhile, Jesse has a 12-year-old daughter to consider as he struggles with his feelings for Skye.
Skye did live in Canada for awhile. But now she is home in Emerald Cove with sisters Clover and Aria. They are running their family hotel together and things are going quite well. Over the course of years, Skye and Jesse do spend time together, and things are always hot and heavy between them. However, their lives exist on different continents. How will the two of them deal with the undeniable chemistry that exists between them? What is more is where do their hearts lie?
Jesse and his daughter Bea are headed to Jewel Island for the annual Pudding Parade. Will this finally give the couple a chance to address their feelings and figure out a future where they can be happy together?
This is not a simple romance. Jesse has baggage that is powerful enough to derail any hope for the future. Will Skye be strong enough to break through that with Jesse? Who will confront their heart's truest feelings first? What an emotional story! Every time I thought they found the answers, there was drama to prove the real difficulties facing them. I loved seeing Aria and Clover again. The sisters were wonderful in this book, as was Jesse's daughter Bea. I loved this book! In fact, I was so drawn to it that I could not put it down until I finished it late into the night. This book delivers a beautiful story that offers a gorgeous setting on the Cornish Coast.
Many thanks to Holly Martin for this ARC for review. This is my honest opinion. 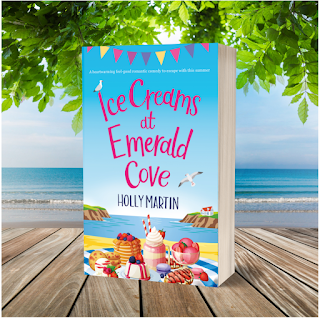