Review - In the Garden of Spite 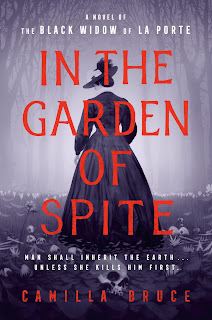 Title:  In the Garden of Spite
Author:  Camilla Bruce
Publisher:  Berkley
Genre:   Historical Fiction
Format:  Kindle ARC
No. of Pages:   480
Date of Publication:   January 19, 2021
My Rating:   5 Stars
DESCRIPTION:
An audacious novel of feminine rage about one of the most prolific female serial killers in American history--and the men who drove her to it.
They whisper about her in Chicago. Men come to her with their hopes, their dreams--their fortunes. But no one sees them leave. No one sees them at all after they come to call on the Widow of La Porte. The good people of Indiana may have their suspicions, but if those fools knew what she'd given up, what was taken from her, how she'd suffered, surely they'd understand. Belle Gunness learned a long time ago that a woman has to make her own way in this world. That's all it is. A bloody means to an end. A glorious enterprise meant to raise her from the bleak, colorless drudgery of her childhood to the life she deserves. After all, vermin always survive.
Link to purchase the book
MY THOUGHTS:
In this fictionalized version of true the true historical event from one of the most brutal female serial killers, author Camilla Bruce brings us into the very disturbed mind of Belle Gunness. Belle is a woman who learned to exist due to spite. Born Little Brynhild, but she had her reasons for changing her name to Belle. She experienced many awful things in her early life: was extremely poor, had an abusive and controlling father, her mother seemed without strength, but worse of all, she experienced unspeakable trauma that marked her for life. She soon took the first steps that would prove how brutal she would become.
Meanwhile, as this story goes, Belle, who was born and raised in Norway, always wanted to get away. Her hopes were extremely dim, but her sister Nellie escaped to American years previously. Nellie is living in Chicago, married, and at the time, has a small son. Nellie's life is not much better financially than Belle's, but she is away from all of that darkness.
This is Belle's story, but Nellie is our other narrator in this grim tale. In fact, the author has taken certain literary licenses to make the brutality that occurred into something readable. She did a remarkable job, thus we have Nellie's interesting and thought-provoking point of view. It takes some years, but Belle manages to board a ship that brings her to America, and to her sister's home. However, Nellie can sense a darkness in Belle, something that cannot be assuaged.
Eventually, Belle marries and then it all begins. Belle has a husband, a home and more, but it is not enough. She soon becomes known as the Widow of La Porte, as her husband dies. How he dies is up to the reader to discover. Remember, Belle lives based on spite, and what she does in her life proves this fact every single day. If she has to live by brutal, gruesome, unspeakable means, so be it. Belle is a survivor. She makes her own rules. Also, just as we have Nellie as a character in this story, there is another character, James Lee, who has a great impact on Belle's life.
While this story is not for the faint of heart, ergo ME, I simply could not put it down. Seeing inside the mind of someone so disturbed was very intriguing that I read page after page until I got to the very last chapter. I did have to put the book down then. I chose to watch a couple of podcasts on YouTube to further deal with what I was reading. Then I completed this incredibly written book.
Many thanks to Berkley and to NetGalley for this ARC for review. This is my honest opinion.

Camilla Bruce is a Norwegian writer of dark speculative and historical fiction.
Her debut novel, You Let Me In, is out now from Bantam Press (UK) and Tor (US).
Her dark historical, In the Garden of Spite, is out from Berkley in the US, and will be published in the UK by Michael Joseph in August 2021.
web | twitter