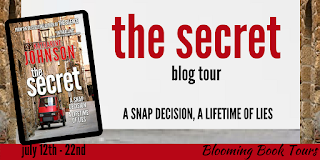 Today is my day for the Blog Tour for The Secret,
by Katharine Johnson.

A Snap Decision, A Lifetime Of Lies

Two girls growing up in Mussolini’s Italy share a secret that has devastating consequences. Against a backdrop of fear, poverty and confusion during the Second World War friendship is tested and loyalties divided but a chance encounter changes everything.

The girls’ lives diverge when beautiful, daring Martina marries and moves into Villa Leonida, the most prestigious house in their Tuscan mountain village while plain, studious Irena trains to be a teacher. But neither marriage nor life at Villa Leonida are as Martina imagined. And as her best friend’s life takes on a new purpose Irena finds herself left behind.

Decades later, a tragedy at the villa coincides with the discovery of an abandoned baby, whose identity threatens to re-open old wounds. While Irena’s son is determined to get to the truth about the village’s past, Martina’s daughter is desperate to keep it hidden.

Additional Info: This is a standalone story but features a second dark secret harboured by Villa Leonida, the house at the centre of The Silence, published last year. Although it’s not necessary to have read the first book it’s probably helpful to know that it included the discovery of some bodies at Villa Leonida which relate back to the summer of 1992.

This book tour has its own giveaway to win a signed paperback of The Secret.
The competition is open for UK residents only. 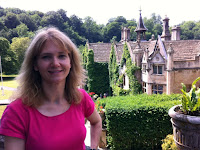 Katharine Johnson writes about ordinary people in extraordinary situations. She grew up in Bristol, has lived in Italy and divides her time between Berkshire and Lucca. She loves books and old buildings and gets most of her plot ideas while out walking her madcap spaniel.

The people of the picturesque village of Santa Zita in the Tuscan mountains are harboring secrets. A deadly secret, one that led to the discovery of bones, was revealed. Now, it is a year later, and there is another dark secret. Sonia did something a quarter of a century ago, and it is about to come to light. She is desperately guarding her secret. However, this is not the deepest of secrets in this book. Childhood best friends, Martina and Irena, as their story is told in the World War II timeline, have an incredible story that is slowly revealed.

From the captivating scenery to characters that kept my interest from the very beginning, and to the incredible writing style, The Secret takes what could be a simple story of two girls in 1940s wartime Italy to being so much more. It flawlessly weaves the story between two timelines, including the present. Although some references are made to The Silence, Katharine Johnson's previous book, which I feel that I must read, this book works remarkably well as a stand-alone. I enjoyed this book very much and read it in two sittings. I will definitely be reading more of this author's books as she has just found a new fan. As a matter of fact, I have already purchased The Silence.

Many thanks to Crooked Cat Books for this ARC to review in exchange for my honest opinion.
Posted by Robin Loves Reading at 7/19/2018 06:12:00 AM