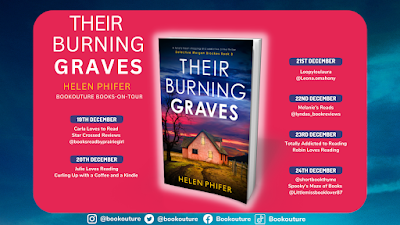 DESCRIPTION:
They are picture perfect. A young, happy family sat around the kitchen table. But no one moves as wisps of smoke filter into the room and the house becomes a burning grave around them…When reports come in of a family trapped in a burning house, Detective Morgan Brookes rushes to the scene. But as soon as she enters the ruined home, she is devastated by what she finds. Tied to the kitchen table, Sally and David Lawson, and their young son, had no chance of escaping the flames and the smoke…Neighbours all agree the Lawsons were the perfect family, and CCTV shows nothing suspicious. Morgan’s only clue is the silver crucifix necklace around Sally’s neck. Because according to friends, she wasn’t religious. Was someone passing divine judgement on this mother and her family?Focusing on Sally’s last steps, Morgan gets the breakthrough she needs – just days ago Sally had confided in a friend that she felt someone was watching her. And when Morgan finds photos of Sally on her neighbour Luke’s phone, all the pieces slot together.Only then another local woman reports feeling watched. Nothing seems to link her to Luke, but Morgan can’t ignore it. Could the killer still be out there? Going deeper into Sally’s past and uncovering the killer’s motivations is her only chance to save more innocent lives, but can she solve the twisted puzzle in time?A completely addictive and gripping crime thriller! Perfect for fans of Angela Marsons, Robert Dugoni and Rachel Caine.
BUY LINK:
https://geni.us/B0BH52VYK9social
MY THOUGHTS: 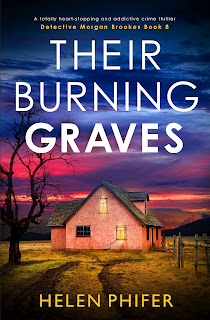 Title:   Their Burning Graves
Author: Helen Phifer
Series:  Detective Morgan Brookes #8
Publisher:  Bookouture
Genre:   Mystery & Thrillers
Format:  Kindle ARC
No. of Pages:   265
Date of Publication:   December 19, 2022
My Rating:   5 Stars
Three dead bodies. A small family of three. When Detective Morgan Brookes is called to the case it is actually a scene of a fire. It doesn’t take long for evidence to reveal that the fire was set to cover over the murders. No one had a chance of surviving. In fact, as this book begins, the wife Sally is driving home and enters her home and finds it too quiet. That is when she herself is immediately killed in the same manner as her husband and son.
Morgan jumps into this case. There is a particular clue left that gives Morgan just enough information to get started on her investigation. She thinks at the very beginning that she has a strong suspect because everything begins to fall into place rather quickly. However, when a similar event occurs, she realizes her chief suspect just might not be the killer.
While Morgan is working on this investigation, her team, including her boyfriend Ben, are still dealing with the loss of one of their own. Already sensitive to the loss of one of her colleagues, Morgan finds herself very emotional about these murders and wants them solved as quickly as possible. If this means placing herself in danger in order to solve this case, then that’s what she will do.
Having been drawn into this series from the very beginning, I have found Morgan to be quite a strong protagonist. Helen Phifer displays yet another facet of Morgan’s intense personality in this book. In this latest installment, I felt that Morgan was more sensitive than she has been on other cases. I was truly riveted to this book and any lover of intrigue and drama would be as hooked as I was. Factor in a few surprises that led to a powerful conclusion and this book easily earned five stars. In fact, I loved being truly surprised at the killer’s identity. As always, I am more than eager for the next book in the series.
Many thanks to Bookouture and to NetGalley for this ARC for review. This is my honest opinion. 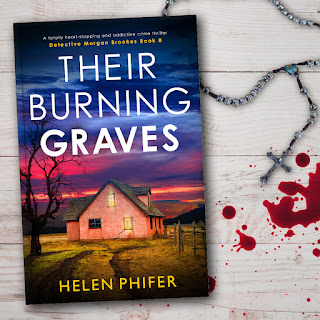 She lives in the busy town of Barrow-in-Furness surrounded by miles of coastline and a short drive from the glorious English Lake District.

Helen loves reading books that scare the heck out of her and is eternally grateful to Stephen King, Dean Koontz, James Herbert and Graham Masterton for scaring her senseless in her teenage years. Unable to find enough scary stories she decided to write her own and her debut novel The Ghost House released in October 2013 became a #1 Global Bestseller.

She has written over twenty books in various genres and you can follow her over on Instagram https://www.instagram.com/helenphifer/

Or find her over at www.helenphifer.com