Inspired by one of the OSS’s few female operatives, Barbara Lauwers, a WWII novel set at OSS’s Morale Office in Rome, which was responsible for creating black propaganda and distributing it behind enemy lines. From the New York Times bestselling author of The Bookseller's Secret.

Inspired by a real-life female spy, a WWII-set novel about a woman challenging convention and boundaries to help win a war, no matter the cost.

1944, Rome. Newlywed Niki Novotná is recruited by a new American spy agency to establish a secret branch in Italy's capital. One of the OSS's few female operatives abroad and multilingual, she's tasked with crafting fake stories and distributing propaganda to lower the morale of enemy soldiers.

Despite limited resources, Niki and a scrappy team of artists, forgers and others—now nicknamed The Lipstick Bureau—find success, forming a bond amid the cobblestoned streets and storied villas of the newly liberated city. But her work is also a way to escape devastating truths about the family she left behind in Czechoslovakia and a future with her controlling American husband.

As the war drags on and the pressure intensifies, Niki begins to question the rules she's been instructed to follow, and a colleague unexpectedly captures her heart. But one step out of line, one mistake, could mean life or death… 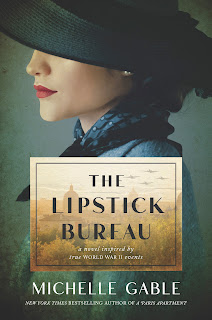 Title:   The Lipstick Bureau
Author:   Michelle Gable
Publisher:  Graydon House
Genre:   Historical Fiction
Format:  Kindle ARC
No. of Pages:   464
Date of Publication:   December 27, 2022
My Rating:   4 Stars
Propaganda was the name of the game for Niki Novotná and a small group put together by the OSS. Her team was called The Lipstick Bureau. In this inspiring read that was based on the true story of Barbara Lauwers, we read of the harrowing exploits that Niki undertakes in order to thwart the actions of the Nazis during World War II. Niki and her team worked really hard in their efforts.
Sometimes Niki received help from her friend Paloma, who was a prostitute. In fact, the story is relayed from both Niki and Paloma’s perspectives. Niki went to any extreme she found necessary in order to get the job done. Although married to an American at the time Niki was a part of the Lipstick Bureau, she fell deeply in love with Will, one of her colleagues, and he himself was also married. Niki’s strengths were her incredible talent for languages, as she spoke seven. She was also a very hard worker and was quite dedicated, even if meant breaking rules as she saw fit.
As the focus was to try to bring an end to the war, Niki and her team came up with intriguing ideas. Things were beyond challenging, but they never gave up the fight. As mentioned, this story was based on a real life woman, so the author Michelle Gables did exceptional research, and even includes a bibliography at the end of the book for anyone wanting to learn more about that aspect of the second World War.
Many thanks to Graydon House and to NetGalley for this ARC for review. This is my honest opinion.
Please enjoy the following excerpt:
Please enjoy my YouTube video review -
ABOUT THE AUTHOR:

MICHELLE GABLE is the New York Times bestselling author of A Paris Apartment, I'll See You in Paris, The Book of Summer, and The Summer I Met Jack. She attended the College of William & Mary and spent twenty years working in finance before becoming a full-time writer. She grew up in San Diego and lives in Cardiff-by-the-Sea, California. Find her on Instagram, Twitter, or Pinterest, @mgablewriter.